User Experience and the CTA: Fixing Everything in 3 Steps

“The impetuous creature--a pirate--started forward, sprang away; she had to hold the rail to steady herself, for a pirate it was, reckless, unscrupulous, bearing down ruthlessly, circumventing dangerously, boldly snatching a passenger, or ignoring a passenger, squeezing eel-like and arrogant in between, and then rushing insolently all sails spread up Whitehall.”

At Table XI, we employ research techniques to analyze user experience (UX) for the websites and mobile apps we develop—it’s a key component to building intuitive, functional products. But UX methods extend way beyond software development—they can be used to uncover more about how we experience our everyday lives.

Take the CTA, for example. User experience within the CTA is especially important now considering the comprehensively disastrous Ventra rollout. If Ventra had taken just a few minutes to look around and talk to users, maybe things would’ve turned out differently. According to the CTA’s website (which last updated its stats in 2010), on an average weekday, 973,061 people board a bus and 641,261 take a train. This means Chicago’s transportation system affects more than half the city’s population. How awesome would it be to improve an experience shared by so many? The burning wreckage of Ventra’s debut notwithstanding, I decided to do just that, using UX strategies we apply when developing software.

To formulate solutions, it’s helpful and often necessary to talk first with people already using the system. The goal here is to gain insight into their experience. Are there any associated rituals? Entrenched attitudes? Have users improvised their own solutions? Do they have a favorite part? What do they dread?

I interviewed three people. Here’s a summary of their comments:

“I always get a lot of reading done.”

“It can be nice, especially if you’re above ground, to watch the scenery.”

“I like that I don’t have to think about driving or traffic.”

“When I enter the platform right as my train pulls up, I feel as though all is right in the universe and where I am going is where I am supposed to go.”

“The euphoric, childlike joy I get when I walk into an empty train car or bus. If it's a bus, then I pretend he's my driver and I'm a princess who chose to see what it felt like to be ‘just like everyone else’ (but I'm still a princess and would really rather this bus be empty right now).”

“The smell of pee/fear of sitting in pee.”

“Trying to keep it cool while losing [my] balance—there is no solution for this.”

“Going underground means no service on phone/nothing to look at while trying to avoid eye contact/how are all these people on their phones right now??!”

“People who don’t know how to get to off the train, but just stand in the doorway/having to restrain myself from pushing them on the tracks.”

“Sometimes I get a little paranoid that people are reading my screen.”

“User-centered design” means continually circling back to the user, comparing the reality of their lived experience to the solution you devise. Talking to people reliant on the system you aim to improve gives you empathy for their experience, but you also have to balance this immersion with your own observations. 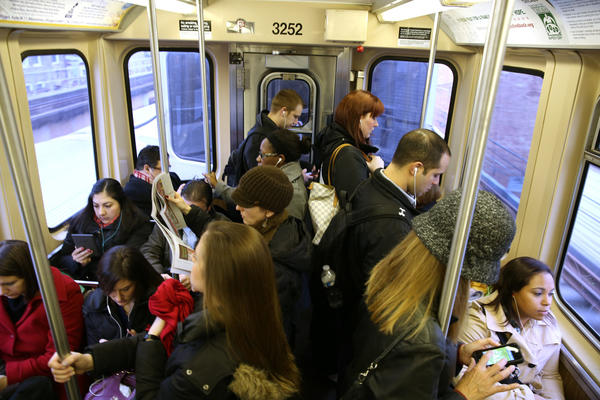 At my bus stop I noticed there were no accepted rules for lining up to board. Instead, everyone stood around and then surged forward, creating confusion and delay. Once aboard, I found a seat, took out my phone, and saw that most of the other riders did the same. I spotted two hardcover books and one magazine. More than half the train were wearing headphones. Eventually I became aware of a person sitting next to me wearing a giant fur coat. I imagined briefly that they were a Grizzly bear. I then imagined the sort of confusion and chaos a Grizzly bear would cause on the 134.

Researching the ride isn’t enough though. In our modern metropolis, GPS and Google maps make it possible to track the next train. I think this accounts for why comparatively few complaints had to do with lateness or delays. The commuters I talked with had ways to entertain themselves, their anxiety instead focused on if they would lose wireless service and if their fellow riders would prove inconsiderate or inconvenient. These research-generated insights ultimately formed the basis for my UX suggestions.

Hopefully by this stage you’re able to look at your users’ problems from a more informed perspective. In the case of Chicago’s public transportation system, I learned that a lot of users had improvised their own improvements (bringing a magazine to read if they were going underground, for example). My solutions aim to amplify and support these initiatives. They are as follows:

1. Repurpose announcements to instruct riders on most efficient on-boarding/off-boarding procedures.
Most of the friction associated with using public transportation relates to inconsistent social norms: Is there a line? Who is getting off at this stop? Offering instructions, in a voice and tone that resonates with users, would eliminate inefficient, complacent confusion.

2. Empower drivers by giving them more control over announcements.
I understand and support rules which prohibit smoking, eating, drinking, and gambling on the CTA. I do, however, have a problem with announcements reminding me of these rules. My instinct, when I hear the disembodied voice, is always to look around to see who’s smoking or who's set up a covert roulette wheel. Telling someone not to do something they are already not doing is alienating. Instead, give the operator the ability to toggle specific announcements as applicable.

4. Offer discounted subscriptions to print publications.
Old fashioned print media is the most efficient reading material for routes which don’t have cell service. One commuter mentioned that on a crowded Red Line train, a magazine was “perfect” because it was easier to fold than a book and it didn’t require a wireless connection. To capitalize on this behavior, the CTA should join forces with Conde Nast, Hearst, or other magazine or newspaper publishers to offer discounted or free subscriptions with the purchase of a CTA pass.

Applying UX strategies has led me to conclude that improving the experience of  public transportation actually involves limiting the negative influence of sharing space and systems with strangers. While it’s tempting to think that “Hell is other people,” the more optimistic outlook is that an improved user experience starts with each of us.