Following up on last fall’s successful Chicago Ideas Week session, “My Worst Idea Ever,” we’ve partnered with developer-training organization Dev Bootcamp to host a quarterly “Biggest Mistake Night”—aka, “Mrs. O’Leary Night,” in honor of the woman whose cow mythically started the Great Chicago Fire—in which smart people talk about the bad ideas they’ve had and what they’ve learned from them.

There is importance in failure—not only does it give you nuts-and-bolts experience that you can draw from later, but it also teaches you how to deal with making mistakes and, best yet, how to rebound from them. It’s empowering—especially for those just starting their careers—to hear experienced professionals openly and honestly discuss their mistakes. It reminds us that nobody’s perfect, that even the best minds need to ask for help sometimes, and that failing isn’t shameful.

“There was something subtly energizing that happened when a bunch of people who usually talk about their successes spent a bunch of time talking about their failures. The energy in the conversations before and after the event was incredible,” said Dev Bootcamp’s founder, Dave Hoover (pictured below). 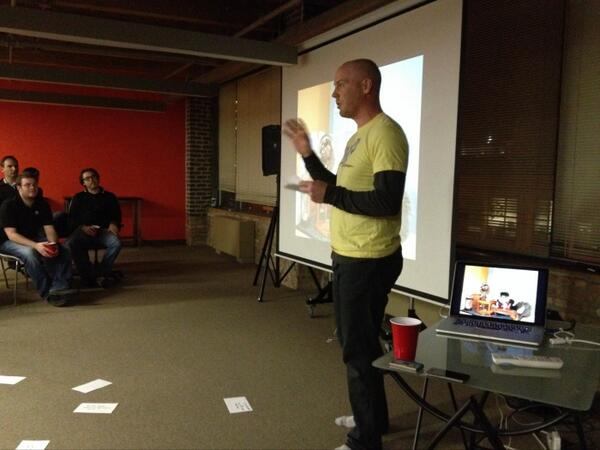 We kicked off the first Mrs. O’Leary Night with guest Mistakers Hoover, Margaret Pagel (8th Light), Aaron Kalin (Treehouse), Aaron Bedra (Cigital), and our own COO Mark Rickmeier, each of whom gave a PechaKucha-style talk. These are incredibly accomplished and respected individuals, but they felt comfortable talking about some of the mistakes they’ve made—and there were some doozies—to pass on what they’ve learned to others.

“Humility is such a big part of becoming a software developer and this event gave each presenter a chance to acknowledge their mistakes, in a very welcoming group!” said Pagel.

We’ll hold the next Mrs. O’Leary Night in May, so please email kate@tablexi.com if you’d like an invitation. The talks are open to all—while several of our speakers thus far have been developers, many of the mistakes they’ve made and the lessons they’ve learned extend far beyond the software industry.

Until then, check out these wise words from February’s Mistakers: